♦ What is Legionnaires disease?
Is a form of atypical pneumonia caused by any type of Legionella bacteria.

♦ Signs and symptoms
The length of time between exposure to the bacteria and the appearance of symptoms is generally two to ten days, but can rarely extend to as much as 20 days. For the general population, among those exposed between 0.1% and 5% develop disease, while among those in hospital between 0.4% and 14% develop disease.

Those with Legionnaires' disease usually have fever, chills, and a cough, which may be dry or may produce sputum. Almost all with Legionnaires' experience fever, while approximately half have cough with sputum, and one third cough up blood or bloody sputum. (hemomptysis)
Some also have muscle aches, headache, tiredness, loss of appetite, loss of coordination (ataxia), chest pain, or diarrhea and vomiting. Up to half of those with Legionnaires' disease have gastrointestinal symptoms, and almost half have neurological symptoms, including confusion and impaired cognition.
"Relative bradycardia" may also be present, which is low or low-normal heart rate despite the presence of a fever.

♦ Laboratory tests
may show that kidney functions, liver functions and electrolyte levels are abnormal, which may include low sodium in the blood.
Chest X-rays often show pneumonia with consolidation in the bottom portion of both lungs. It is difficult to distinguish Legionnaires' disease from other types of pneumonia by symptoms or radiologic findings alone; other tests are required for definitive diagnosis.

♦ Cause
Over 90% of cases of Legionnaires' disease are caused by the bacteria Legionella pneumophila.
Other types include L. longbeachae, L. feeleii, L. micdadei, and L. anisa.

♦ Transmission
Legionnaires' disease is usually spread by the breathing in of aerosolized water and/or soil contaminated with the Legionella bacteria. Experts have stated that Legionnaires' disease is not transmitted from person to person.
In 2014 there was one case of possible spread from someone sick to the caregiver. Rarely, it has been transmitted by direct contact between contaminated water and surgical wounds.
The bacteria grow best at warm temperatures. It thrives at water temperatures between 25 and 45 °C, with an optimum temperature of 35 °C. Temperatures above 60 °C kill it. Sources where temperatures allow the bacteria to thrive include hot water tanks, cooling towers, and evaporative condensers of large air conditioning systems, such as those commonly found in hotels and large office buildings. Though the first known outbreak was in Philadelphia, Pennsylvania, cases of legionellosis have occurred throughout the world.

♦ Mechanism
Legionella enters the lung either by aspiration of contaminated water or inhalation of aerosolized contaminated water or soil.
In the lung, the bacteria are consumed by macrophages, a type of white blood cell, inside of which the Legionella bacteria multiply causing the death of the macrophage. Once the macrophage dies, the bacteria are released from the dead cell to infect other macrophages. Virulent strains of Legionella kill macrophages by blocking the fusion of phagosomes with lysosomes inside the host cell; normally the bacteria are contained inside the phagosome, which merges with a lysosome, allowing enzymes and other chemicals to break down the invading bacteria.

♦ Diagnosis
People of any age may suffer from Legionnaires' disease, but the illness most often affects middle-aged and older persons, particularly those who smoke cigarettes or have chronic lung disease.
Immunocompromised people are also at higher risk.

The most useful diagnostic tests detect the bacteria in coughed up mucus, find Legionella antigens in urine samples, or allow comparison of Legionella antibody levels in two blood samples taken 3 to 6 weeks apart.
A urine antigen test is simple, quick, and very reliable, but it will only detect Legionella pneumophila serogroup 1, which accounts for 70 percent of disease caused by L. pneumophila, which means use of the urine antigen test alone may miss as many as 30% of cases.
When dealing with Legionella pneumophila serogroup 1, the urine antigen test is useful for early detection of Legionnaire's disease and initiation of treatment, and has been helpful in early detection of outbreaks. However, it will not identify the specific subtypes, so it cannot be used to match the person with the environmental source of infection.

The Legionella bacteria can be cultured from sputum or other respiratory samples. Legionella stains poorly with Gram stain, stains positive with silver, and is cultured on charcoal yeast extract with iron and cysteine (CYE agar).
A significant under-reporting problem occurs with legionellosis. Even in countries with effective health services and readily available diagnostic testing, about 90 percent of cases of Legionnaires' disease are missed. This is partly due to Legionnaires' disease being a relatively rare form of pneumonia, which many clinicians may not have encountered before and thus may misdiagnose. A further issue is that people with legionellosis can present with a wide range of symptoms, some of which (such as diarrhea) may distract clinicians from making a correct diagnosis.

♦ Treatment
Effective antibiotics include most macrolides, tetracyclines, ketolides and quinolones. Legionella multiply within the cell, so any effective treatment must have excellent intracellular penetration. Current treatments of choice are the respiratory tract quinolones (levofloxacin, moxifloxacin, gemifloxacin) or newer macrolides (azithromycin, clarithromycin, roxithromycin). The antibiotics used most frequently have been levofloxacin, doxycycline, and azithromycin.

♦ Prognosis
The fatality rate of Legionnaires' disease has ranged from 5% to 30% during various outbreaks and approaches 50% for nosocomial infections, especially when treatment with antibiotics is delayed. Hospital-acquired Legionella pneumonia has a fatality rate of 28%, and the principal source of infection in such cases is the drinking-water distribution system. 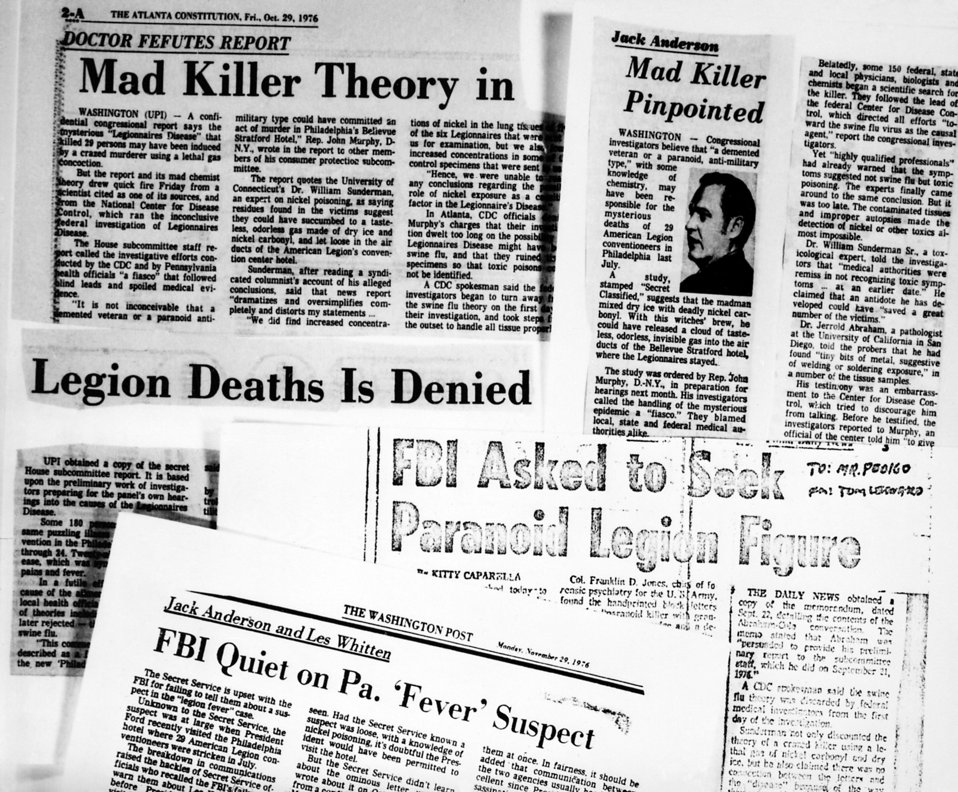